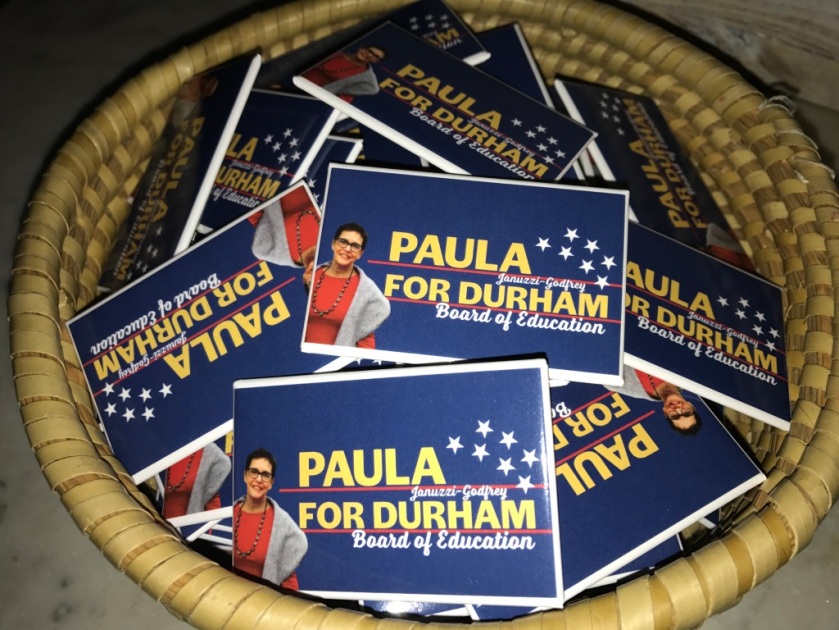 Either way, I thought, “Right, but it’s only three months. I can do this.”

“Why don’t you tell us how you really feel?” That’s something I hear often. I tend to say what I am thinking, and if it has anything to do with public education and equity, I’m going to not only say what I am thinking, but I am going to say it with many strong emotions. And my hands. I’m going to say it with my hands, because I can’t say anything without my hands joining me. The stronger the emotion, the more my hands get involved. It’s an Italian thing. It’s who I am. I am usually pretty good at thinking before I speak and I work hard not to offend others when I speak, or to say anything that may be taken in a way it was not intended. That can be challenging when strong emotions are involved.  Mine are usually a mix of emotions, and I am generally good at keeping them in check in public. As I have tried to process my campaign experiences, I seem to always come back to how I was feeling during  a particular moment, conversation or event. I can vividly remember my experiences as they were connected to an emotion, person and place.

When I decided to write about my recent political campaign experiences, I made a list of emotions. I made a list, with the help of some predetermined lists that have been used by others who work in the field of, I guess, emotions? I didn’t actually know there were such lists, but there are several to choose from. I wanted a list of emotions because I realized that I had experienced such a range of emotions throughout this experience, and those emotions were the driving forces for me before, during, and after my campaign. They just kept creeping back into my life daily, and oftentimes, several emotions would swell up inside me throughout my eighteen hour days. Eighteen hours was the typical length of my day for three months. During my campaign, there were many nights when I only got true rest for 4-5 hours per night. I’m sure that played into my emotions as well.

Those eighteen hours were filled by working my full-time job at school, preparing for my work, fulfilling campaign demands, being a spouse, friend, mom and daughter, swimming or walking daily, and preparing and eating meals. I promised myself that I would continue to follow my healthy eating habits, which luckily had been established over the prior eleven months. That required 30-40 minutes every evening of cooking and prepping all of my meals for the next day, and then cooking and packing three meals to take with me in the early morning. Oh, and there was my mom’s 90th Birthday Celebration in Ohio in late December, and the other holidays thrown in there. And did I mention the flu that knocked me out for 5 days in February? There was that too.

I also had no way of knowing that COVID-19 would fall on the heels of the NC Primary Elections, so much of my time and energy the past two weeks has been focused on children, families and teachers trying to wrap their heads and lives around that crisis.

My intention with this series of blog entries is to try to capture my journey of running for school board as a first timer in the world of campaigning. I literally started from scratch and depended on the kindness and generosity of my friends and family. It was a journey like no other for me. A journey full of emotions that pushed me through and sometimes almost knocked me down. I hope you’ll join me as I try to capture some moments that contributed to a three month emotional rollercoaster ride.